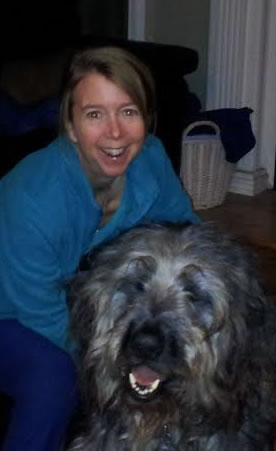 Interesting Facts from A Resilient Life

Before the discovery of general anesthesia people routinely chose death over the dreaded experience of a surgery where they would feel every cut. The surgeons in those days would come into the operating room with a bottle of whisky not only for the patient, who hopefully got first dibs, but for himself and his assistants so they could endure the agonizing screams they would be hearing over the next few hours. After anesthesia, the so called “World’s most important medical discovery,” came into popular use in the late nineteenth century life expectancy went up from thirty five to fifty, over twenty five percent. (Chapter 2- Pain is a Four Letter Word)

On average, doctors interrupt their patients after 23 seconds due to their concerns about limited time. However, if the doctor doesn’t interrupt, on average a patient will only talk for 90 seconds. (Chapter 1- The Art and Science of Being A Patient)

Only 15% of people with arthritis exercise three or more times a week and a whopping 70% don’t do any regular physical activity at all. (Chapter 6- Making Moving Part of Your Life)

A two week pilot study compared a group of individuals with active rheumatoid arthritis, either giving them prednisone or putting them on an elemental diet (grain, lactose, and sugar free). The diet was just as effective as 15 mg of prednisone at improving both subjective and objective measures of disease activity.

Many of the drugs commonly used for rheumatoid arthritis deplete some significant vitamins. Here’s an example: Folic Acid, a vitamin that is essential for energy production, cell division, protein metabolism, fetal development, and the formation of red blood cells is depleted by the following common drugs used for rheumatoid arthritis:  methotrexate, corticosteroids, aspirin, sulfasalazine, indomethacin, and non steroidal anti-inflammatories.  (Chapter 5- Nutrition, Are You What You Eat?)

In order for the immune system to operate effectively it has to be able to distinguish self from non-self. One way it does this is through a gene called HLA. We all have a specific type of HLA that each of our cells display on its surface so that other cells can recognize it. People who carry a specific type of HLA, called HLA-DR4, are six times more likely to develop rheumatoid arthritis and twenty times more likely to develop juvenile diabetes. (Chapter 4- Inside Arthritis)

Because rheumatoid arthritis is partially an endocrine disease that affects hormones people with arthritis are at increased risk for insomnia. Sleep issues specific to rheumatoid arthritis that have been identified include difficulty falling asleep, non restorative sleep, higher sleep latency (meaning it takes longer to go from full wakefulness to sleep), more daytime sleepiness, more leg movements during sleep, more sleep shifts from one brainwave pattern to another, more mini arousals, more time in alpha brainwave and less time spent in delta brainwave (remember delta brainwave is required for cell repair, tissue rebuilding and storing long term memory).  During an arthritis flare sleep is even more fragmented.  (Chapter 8- Sleep- How to Get Happy ZZZ’s) 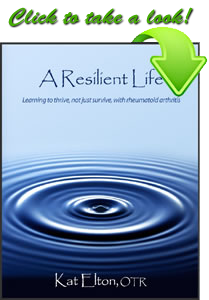 "When I take the time to ponder the true meaning of health I realize that, surprisingly, my disease has made me healthier. With each challenge the disease has created for me, the opportunity has been there to transmute this challenge into a lesson on how to be a better person. The arthritis has made me wise. And I use this wisdom to create a healthy life." --Kat Elton 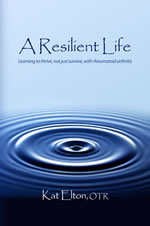 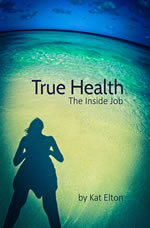